Demand for Natural Justice and Due Process

Incompetence of L.P. Admin. Not fit for purpose. This is the responsibility of Iain McNicol and the NEC

The incompetence of the L.P. administration – most specifically in relation to the administration of the (non-existent) process concerning those members Suspended or Expelled makes it clear and urgent that the whole system needs to be dismantled and rebuilt. It quite simply is not fit for purpose. Worse than that it is not merely creating a shambles record wise but is seriously damaging members health and wellbeing. SHAME ON MCNICOL AND SHAME ON THE NEC.

1.`Even though I received a letter 2 weeks ago to say my suspension was lifted (with a warning of course), my CLP have politely told me I am not welcome to attend tomorrow’s meeting as “Unfortunately, in accordance to the membership system, your status today is still “suspended” “. Why am I wasting my precious time?`

2. `I got the same email today!  … I haven’t written back yet complaining about the warning on file and in the meantime I get the interview/ suspended email *after* the unsuspended letter`

3. `Here is an example of the complete inefficiency of this band of tossers. Having unsuspended me they have now sent me ANOTHER LETTER about interviewing me!

As you will be aware, you are currently administratively suspended from the Labour Party pending an investigation.

The General Secretary has appointed me as investigating officer. Would you please let me know if you are available for interview on Monday 12th December 2016 at 11:30am. The interview will take place over the phone.

[Have now received an apology!!! From Sam Matthews fir sending me the letter in error!]

This particular member was unsuspended BUT with the caveat of a Warning and the threat of `left on file` – and has written refusing to accept the Warning and demanding that the assumed guilt is removed from the file. No response except to issue another letter saying they want to carry out a telephone interview!

Can you see yet NEC just how this is tantamount to harassment? Can you see yet NEC how you are guilty of a dereliction of duty? NO? Maybe it is simply you don`t care about the effect your non actions in allowing Iain McNicol to continue with this debacle. Non-action on your part makes you equally culpable!!  We need a complete overhaul of the whole system. It is not fit for purpose. It is damaging to the Labour Party, let alone to the health of the individual members. 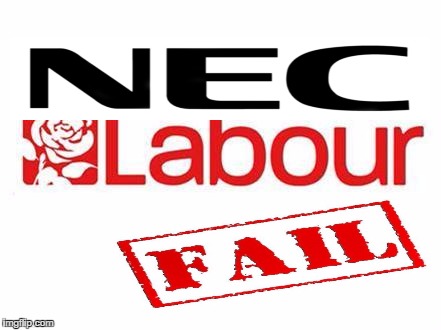 3 thoughts on “Incompetence of L.P. Admin. Not fit for purpose. This is the responsibility of Iain McNicol and the NEC”

NOT GUILTY – I will not accept NEC `warning`

I have a number of friends who were Owen Smith supporters and who probably believed the hype about "nasty Corbyn supporters".

But when I got suspended they were genuinely shocked. I have had offers from them wanting to act as a character witness for me. Very sweet of them, but I have never done abuse.

Whilst waiting outside the B'ham hustings (I didn't get a ticket) while some were booing Owen Smith and calling him a traitor, I shook his hand and welcomed him and genuinely told him it was nice to meet him. It's who I am and how I am. At 55 I am hardly going to change now.

But that is not the same as "rolling over". Far from it. When I feel strongly about an injustice I do not let go. It is usually about other people, but this time I guess I am the one feeling oppressed!

I was suspended near to the end of the 2nd election campaign, just two days after I finally got an email vote and voted Corbyn!

I haven't had any explanation, and to be left like this in limbo, I consider an insult to all my efforts in supporting and working with Labour (mobilisation officer for In Campaign in my area) campaigning, attending meetings, standing up for Jeremy Corbyn as leader.

In a further crass decision by the NEC they are now lifting suspensions by proclaiming a person guilty and giving them a WARNING and also informing members that `it will be left on file for future reference`!

It is disturbing that the L.P. have zero respect for due process and natural justice.

We have dozens of people who have been sent no evidence of their alleged crime, given no right of reply - and yet the NEC act as a combined judge jury and executioner.

NO CHECKS NO BALANCES

Addressed to one of the resigning MPs, the text was: '@RhonddaBryant Thanks for the long pompous resignation letter. If only you could shit outside the tent instead of in it! Bye'.

Now 4 months later they receive this:

"I am pleased to inform you that your administrative suspension from the Labour Party has been lifted and that you are now free to resume active membership. You were suspended following posts you allegedly wrote on Social Media which may have caused offence to some members.

The NEC has since taken into account the wider context in which your comments were made and has seen fit to lift your suspension with immediate effect. We welcome you back to full membership of the Party".

I think it is crucial to demand an apology. This should, at most , have been put in a file to issue a possible warning (and then dismissed) - certainly not instant suspension for abuse.

I got my ‘un-suspension’ letter today :

I was suspended on a whim for something that was obviously not worth a suspension, but which could serve as a useful pretext to remove a Corbyn supporter’s vote from him? They cashed my £10.00 cheque for my SAR a couple of weeks ago, so I hope this will shed more light when it eventually comes through. Iain McNichol ‘welcome[s me] back to full membership of the Party’. I’ll bet he does as well!

I am fuming that this was quite obviously a trumped up charge that some over enthusiastic compliance officer has just acted on without due care. I’ve missed the leadership election, my branch meetings and my CLP AGM as a result of this suspension. It doesn’t even say what the allegation is. I cannot WAIT for my SAR to come through. They cashed the cheque a couple of weeks ago so they had better send me one.

I’ve missed the leadership election, my branch meetings and my CLP AGM as a result of this suspension. It doesn’t even say what the allegation is. I cannot WAIT for my SAR to come through. They cashed the cheque a couple of weeks ago so they had better send me one.

NO APOLOGY - NOTHING - UNACCEPTABLE